New York – “My grandfather gave me a Turkish rug when I was 17,” he says. “It was damaged and we gave it to a repairman. He did a terrible job. He ruined the rug. I remember thinking I could do a better job.”

Less than a year later, Hayko left Turkey and moved to France to live, study, and work with his cousin, who owned a carpet business. There, he tried going to school but dropped out in his third year and began working full-time at his cousin’s carpet shop. “I learned how to repair rugs,” he recalls. “I liked knotting and repairing. It was a hobby.”

Hayko says he watched other skilled rug weavers and restoration experts and taught himself and developed his technique by trial and error. “The most important part of weaving and repair is matching the thread color,” he explains. “You can have a restoration that’s perfect, the weaving is perfect, but if it’s the wrong color, it will show.Top-quality restoration is invisible.”

Hayko’s work is on display in galleries and auction houses all over the world, but you can’t see it. He says that’s the point.

At his shop, custom-mixed colors are used to dye individual yarns to the precise shade of the carpet, no matter how old or faded it may be. “Imagine trying to match 300-year old colors, fibers, and patterns so precisely that the repair work is completely undetectable,” he says. It’s that passion for artistic work and perfection that makes Hayko one of the most sought-after fine-rug and tapestry experts in the world.

From his years in France to the United States, from a hobby to a business, Hayko has made a name for himself as not only an expert but also, as one customer described, “a man of integrity.” Hayko opened his business, Hayko Fine Rugs & Tapestries, a few years after he arrived in New York. It’s been more than 15 years and he is still as excited as the first day he began.

Today his establishment features some of the finest examples of the ancient art of weaving to be found anywhere, in all price ranges – from museum-quality pieces worth hundreds of thousands to one-of-a-kind rugs including his personal and rare collection of Armenian rugs. In Hayko’s store, rugs hang on all the walls from floor to ceiling. He says his customers comment on “the wonderful aroma of natural wool yarns, a delicious scent that makes you feel almost as if you have been transported to the heart of the ancient section of Istanbul.” He has a workroom in the back, where skilled weavers work on a variety of projects.

Hayko loves educating his customers. “You can buy a rug simply because you feel a special connection with it,” he says. “Fine rugs and tapestries are works of art; no two are alike. Each is as individual as a beautiful painting or sculpture. When you find the right one for you, it’s almost like falling in love.” One client who recently purchased a very expensive rug said, “I bought my first little Sarouk from Hayko when we first met more than 20 years ago. As I became able to afford more expensive pieces, I have always returned to Hayko. I wouldn’t think of going to anyone else. Hayko is a true gentleman, and absolutely honest. He once actually told me not to pay as much as I was prepared to pay for a rug because it wasn’t as good an example of its kind as I wanted. I have become what you might call a serious collector, and Hayko has guided me every step of the way.”

Recently, Hayko was able to make one of his other dreams a reality. “It has been a lifelong passion to teach the younger generations about the craft,” he explains. “I started 15 years ago, when a customer asked me to teach his wife how to repair rugs. She was in the store once a week for five years. She came all the time, but I was too busy to start classes back then. But I have dedicated my time to offering classes. It has always been my dream to run rug-weaving workshops from my store and pass on the secrets of rug-weaving.”

Today Hayko holds weaving classes once a week. He began with a small group of Armenians. The classes have grown into a popular pastime for people of all cultures. His customers love it and consider the classes relaxing. Hayko also runs weaving circles. It’s an opportunity for his students to learn, weave, and socialize.

Hayko’s expertise, reputation, and passion for the art have helped keep his business alive. His choice of career has not always been good for his pocketbook. There have been times when he has struggled to make ends meet. But his passion for rugs and the craft, along with his perseverance and determination, have trumped the bottom line. “I love doing this,” he says. “You have to love what you do, otherwise you can’t be successful.”

View all posts by hayko → 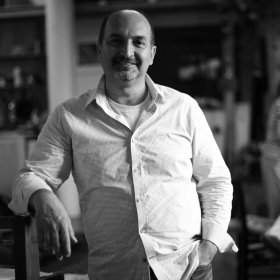 Subscribe to our profiles on the following social networks.

With an innate cultural attraction to the art of rug weaving and well over 35 years of hands-on experience, Hayko’s mission is to provide the ultimate service to his customers in sales, repairs, and cleaning of fine Oriental rugs and European tapestries. Building long-term business relationships with our clients is the most important aspect of our mission.

Dear valued Clients and Friends, The 1010 WINS radio has begun broadcasting our commercial since last Sunday, July 14. The message encapsulates the essence of our business. We are committed to providing each client with the same exacting service as we have provided to several museums, an auction house, and many collectors...
Click Here

Subscribe to our profiles on the following social networks.